The first day at a new school is a strange feeling. Long hallways that lead to only God knows where, feeling like everyone knows more than you, the overall sense of being lost in space. But I’m sure that will all come to pass. I’m already beginning to get over the “newness” of the school. I guess spending 13 hours there on the first day helps.

My day didn’t start off perfectly as planned. I woke up late and missed the train I intended to take. Luckily, I had wanted to get there earlier because the next train was going to be cutting it a bit close. Even then, I only had 15 minutes to wake up, get up, get ready, and head out the door. I start my car with morning dew on the windshield, morning dew that I hadn’t seen all summer. Oh how I did not miss you.

Powering down the road, trying not to miss the next train, OK Go’s upbeat “Invincible” came on my iPod. It seems even my music is trying to give me a boost today, and as gay as it sounds, it did make me feel pumped. My car is shouting at me, “You’re invincible!” Good enough. Thank you car. Yes, it did please me.

As for the video, I like the part where things explode and Damien is damn sexy.

Next song, “Mustang Sally” comes on with Wilson Pickett crooning, “guess you better slow your mustang down.” I’m a pretty superstitious person, so I slowed down and just as I did, the person in front of me braked hard, coming to a stand still. We all sit there in the lane, while the lane next to us was moving quickly. I switch over, and saw that the first car in line, I kid you not, was a black mustang that had its emergency lights on, and was probably stalled.

Anywho, I get on the train without a hitch, sat on it to get to Union. Now, I only had 20 minutes to get from the station to class, a walk that usually takes me 30 minutes. It was invigorating, I hit all the crosswalk lights, walking in a crowd of people moving as one. I felt like a herded cow. I did get stopped at one light about halfway through my trip and my heart was beating fast, and instead of thinking, “I’m tired,” I thought, “Wow, I wonder how many calories I’m burning? Do I feel myself getting thinner?” Hahahhahaha. Good enough!

So, I made it in time for my 8:30 class. I walked in and everyone was mega quiet. To my delight, everyone looked pretty normal, save for one hipster fuck with his shitty moustache. A 3 hour class, we went through the history of type and got assigned some homework. Yay. They’re providing us with a copy of “Type Tool” which is a more basic version of “Font Lab” which is what people use to design typefaces. I’m extremely excited to learn how to use this new piece of software.

11:30, I rushed down to find my next class. I walked all the way around the first floor, and couldn’t find it. I finally gave and asked the guy at the front desk. “It’s over there on the right.” D’oh. So it’s in this lecture hall that seats quite a bit of people. It’s my only class with Zizi, and actually the only day that we go to school on the same day. She has no classes on Wednesday and Friday and I have no classes on Monday and Thursday. Shucks, just bad luck I guess.

I sat in the chairs, trying to figure out how the table things worked, and failing for about 15 minutes, when Zizi came and called me over to sit with her. She showed me how to use the table and thank goodness because I would have broken the stupid chair, had it not been for her. Here’s to two years left in lectures. We had a 2 hour class in which another project was assigned, except this doesn’t seem too bad. Our assignment was to go to Nuit Blanche. Sweet.

That class ended and I had my first break of the day. So Zizi and I went to lunch at the Village on the Grange, the food court across the street from school. It’s very much like Alexis Nihon, except that it’s closer and more vegan-friendly.

My lunch @ Wikki hut with some spicy chicken

So, after lunch, Zizi had to rush off to class, while I sat around by myself. I did get some errands done, tried to get my student card, tried to get a locker, tried to get a textbook. Failing at all three. Saaad. But finally, I went to class in the same lecture hall as my second class, except this time, it was noticeably more full. Even the balcony was filled. Yes, the lecture hall has a balcony. Pretty sweet.

This class has so many tutorials being run, its own blog, and each lecture is posted as a podcast. The future has arrived. I made my first friend in this class, a korean fella who was sitting next to me and was having trouble with the table thing, like I did.

A note about Koreans. They are everywhere. They even have their own club at school, called KASA, which I can only assume means, Koreans Against Similar Asians. Why won’t you let me be one of youuu? Their club has these cute fucking pink tshirts with a cute fucking owl on it. Fuck you guys. And fuck your cuteness. Fuck.

Anyways, that lecture ends, I have another hour before my next class. I spent the time text messaging and video calling. I need to make friends, but all in due time.

My next class is on the sixth floor, and this is the view from my goddamn classroom window: 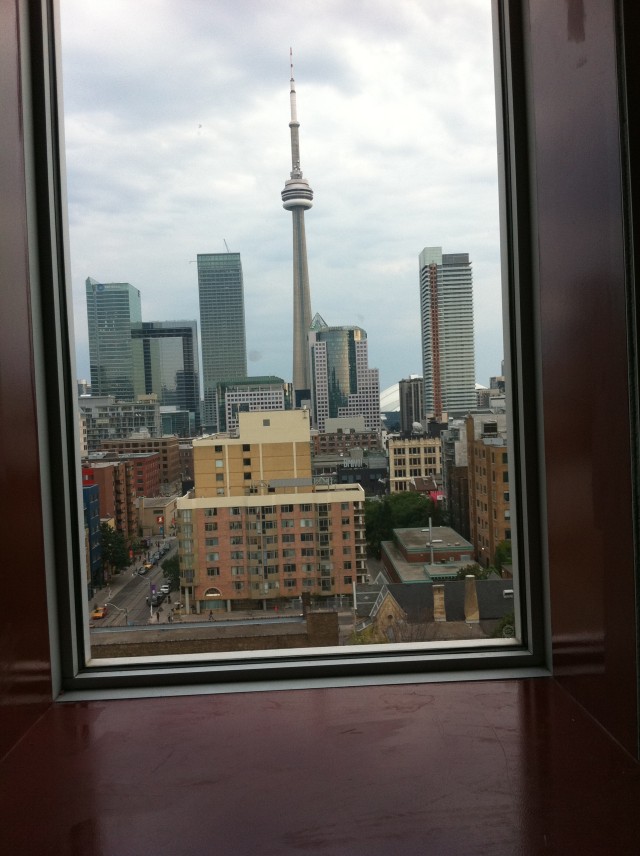 Behh, long class. But it’s my last class of the day. We watched this fantastic old video called Typomania, dealing with letterpress and the movement from linotype/monotype to digital typesetting and printing. Hosted by Erik Spiekermann, it featured an interview with a young Neville Brody.

I only found the 7 minute version of it, but we watched a 25 minute long version. I’m not sure if this version has the interview with Neville Brody or not, but it features Erik Spiekermann in a supermarket. Worth it.

Anyway, that class finished up at 9:30 pm, and I embarked on my walk home with a blistered toe and a hurting ankle. Here is a photographic tour of my walk home:

Gotta love the view now before I go and take it for granted later.

A fantastic church on Bay and Queen.

Walking downtown, in the dark, amongst tall buildings. Scary but beautiful.

And the bus offers a complimentary sperm detection service.

And that, friends, is a nice little summary of my first day at university. More pics to come on my Tumblr!