Ahh, this is my third day here [I lied, I abandoned the post and came back to it 3 days later], and it’s been great. Just one bout of jetlag, but everything else has been going swimmingly. 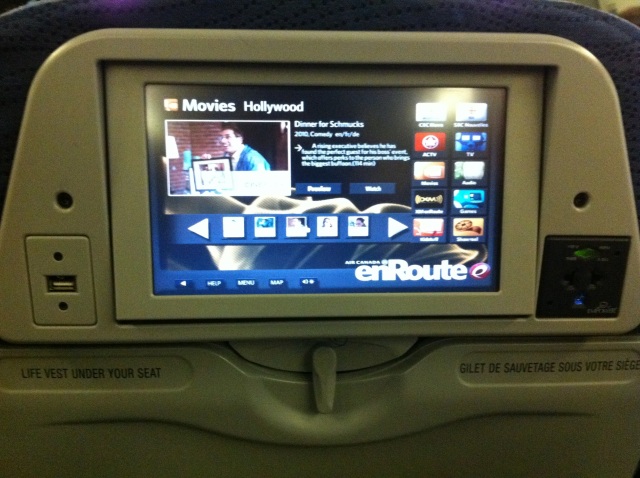 We flew out at 12pm on Sunday, and after an intense tweeting session, our cell phones turned off. Sad. I haven’t received a call or text message in too long. I’m starting to feel a little lonely. First thing I notice on the plane is that overseas flights have gotten a lot better from the last time I saw them. USB ports for charging, a/c adapters, touch screens, and the movie selections are pretty good. They even played Modern Family, Big Bang Theory, Entourage, and even a selection of documentaries. Lots of stuff to choose from, which is great. I finally ended up watching Avatar (the blue people, not the arrow guy) and also “Going the Distance” with Justin Long and Drew Barrymore, which turned out to be a pretty funny movie.

Ahh, airplane food. Beef slop on top of rice, with one tofu, one pepper, and one bean. Corn and bean salad, which was pretty good for the first few bites. Bun, I hate. So gross. And a brownie, and well, it's hard to fuck up a brownie so this one was aight. 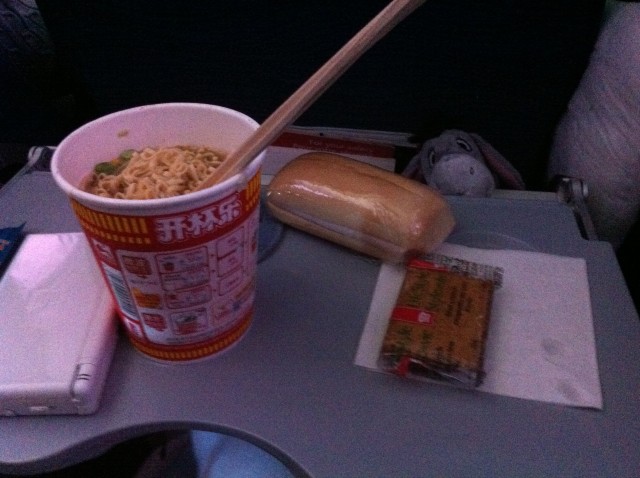 Instant noodles, turkey sandwich, and crackers for a snack.

Farty cheese omelette with mango chutney and shitty potatoes. THAT FUCKING BUN. At least the melon was good.

Japan was pretty cool. I wish I could have left the airport and caught a flight a week later, or at least had more time in the airport, but I only had about 40 minutes. Enough time to buy duty free gifts on behalf of my cousin to her parents, and postcards for Fah Nah Nah. Being thirsty, I picked up a tiny bottle of “Yuzu” juice, which is some kind of asian citrus, I’m assuming. Yummy yummy.

This is how I spent my 6-hour Japan-to-Hanoi ride.

We landed in Ha Noi at quarter to 11 to my momma and pappa and uncle picked us up and we drove to Hai Phong, arriving home at close to 1am. Even at that time of night, it was at least 25 degrees celsius with the humidity. Heaven!

The next morning, my uncle took us out to eat breakfast. Most restaurants (which are not at all like the restos y’all are used to in Canada, there is no fine dining here) are much like the places pictured above. Street vendors lined up and down the street, each selling one specialty dish. Much like the Vietnamese personality and lifestyle, it’s all very informal, rushy rushy, and wary of other patrons but friendly at the same time. 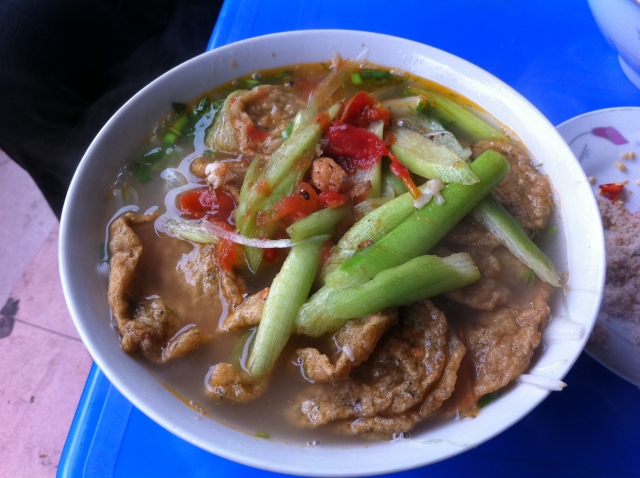 This place served “Bun Tra Ca” (Or is it Cha Ca? I always mix up the Tr and Ch spelling in Vietnamese because it sounds the same to me.) It’s vermicelli noodles with a kind of fish sausage, which are the little brown discs you see floating there, and they do not taste at all like fish, just a slight hint of dill if anything. There are those crunchy vegetables and some tomatoes, and some fresh onions. Soooo yummy. If there’s one thing that I’ve assimilated into my character, growing up in a Vietnamese family, is that if something is served to you, you don’t ask what it is, you just eat it.

A bowl like this I think costs about 10,000$ Vietnam money, or “dông.” Yes, have your laughs now, we Vietnamese deal in dongs. -_- Anyway, 100$ CAN is equivalent to about 2.1 million dongs, (I can hear you laughing now, especially you, Estaban) but we just round it off to 2 million, for easy calculations. So, 10,000$ for that bowl, actually comes out to about 50 cents. A steal, I’d have to say. My brother and I have started to joke around, saying things like… I bet you I can do A, B, or C. I’ll bet you *dramatic voice* one hundred. Thousand. Dollars. Something along the lines of Austin Power’s Doctor Evil, when he asks for a trillion dollars or whatever ridiculous amount of money. But, anyway, it’s fun to pretend we’re ballin’.

“If you lick the sidewalk, I’ll give you one hundred. Thousand. Dollars.”

Some fruit that we like to buy from the market vendors -> cut up sugar cane and a small type of Vietnamese apple. I love these apples, but I looove sugar cane juice the most, which I haven’t been able to have just yet. Not a lot of places serve it now because it’s wintertime. 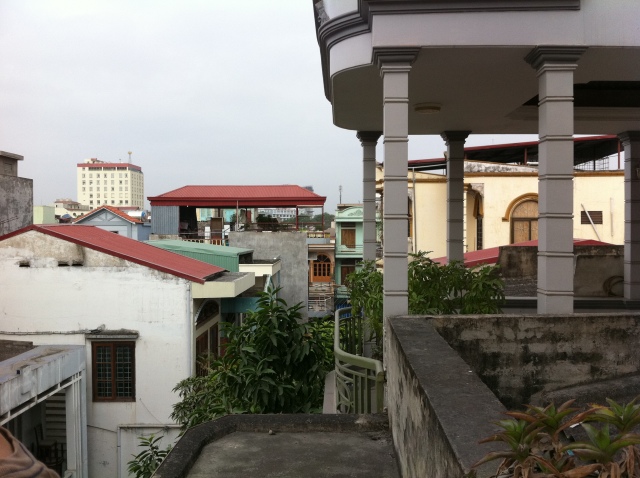 View from the sixth floor

Because land is so expensive in Vietnam, they’d rather buy a small plot of land and build upwards. My uncle/grandmother’s house has seven floors. Awesome. Except they put us on the fifth floor, so it’s a trek and a half to get to our room to grab things and go to bed. Most of the time, we just end up passing out in our parent’s room on the second floor. The second floor also happens to be where the only internet wire and my laptop is kept. No wi-fi up in hurr.

I swear, everytime I turn around around here, there’s another meal for me to consume. This is a home cooked meal. I love these tiny shrimps. They’re a little salty and you eat them with rice. Well, everything here, you eat with rice. The yellow-orange dish is breaded shrimp, the two brownish dishes at the top are “thit bo co” which is basically sautéed short beef ribs, and the bottom green thang is a kind of lettuce soup that you eat with your rice. The brownish water thing is probably a shrimp/beef stew. So much variety to eat for what’s supposed to be a small lunch. 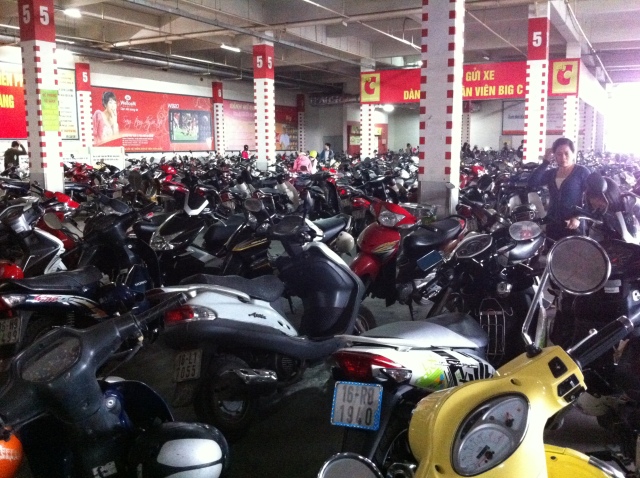 Later that day, we went to “Big C” or the “sieu thi” which is a department store that is not unlike WalMart. The biggest culture shock is that because hardly anyone drives a car, and everyone has bikes or a moped/scooter, this is what the mall parking lots look like. Intense, eh? Or should I say, they are in tents. HAHAHHAHHA. Just kidding, they’re just in a little enclosure. But seriously, I’ve never seen so many scooters in one place, not even at RHS.

But that’s about the end of Day 1 ish. More updates to come about Cat Ba, Xam Bo, more food, and other things. We’re going to La Vang, in Hue, which is the middle part of Vietnam, in a few days, and after Christmas, we’ll be going to Saigon (Ho Chi Minh City) in the south of Vietnam.

Oh yes, and this is how they cross the street in Hai Phong (or maybe in all of Vietnam). That's my uncle there, strutting his stuff in the middle of the street like a mad man.