My good friend and I came across this place on a whimsy on the opening day of the Toronto Jazz Festival, June 24th, which was coincidentally St-Jean Baptiste Day, the “national” holiday of Quebec, where all of us Quebeckers decided to sit around a campfire, drink copious amounts of beer and various other alcohols, light fireworks, and chant “Vivre le Quebec libre!”

We had gone and wanted to see Aretha Franklin perform at Metro Hall, but fell hungry when we realized she wouldn’t be performing till many hours later. Cue Big Daddy’s Oyster Bar. It was the perfect restaurant for the night. A New Orleans themed place, what with the oysters and the voodoo, meshing with the theme of jazz, and of course the French quartier of New Orleans gave us a place to host our mini St-Jean Baptiste celebration, as my friend is also a Montreal expat.

And what a wonderful place  we chose.

The atmosphere was amazing, such kind staff, as the two of us raucously regaled ourselves in a language we’ve scarce been able to speak since arriving in Toronto.

The establishment offered 2$ off appetizers after around 9 o’clock that night, and the two prix fixe menus was a very fair price. Three courses for only about 24 dollars or 36 dollars, depending on how high end your entrées were.

So cheap for food that was absolutely fantastic.

The first course was this great salad with arugula and some other greens I couldn’t identify. On top of which lay asparagus, warm goat cheese, and a caramelized onion dressing. Pomegranate seeds and cherry tomatoes sprinkled the top and a side of corn bread sat on the side. I’ll get to the corn bread later.

The salad was warm but fresh, salty thanks to the goat cheese but highlighted with the sweetness of the onions. The greens weren’t at all wilted but instead were delightfully crisp. Such a great salad, and only the introduction to what was supposed to be a snack but turned into a full fledged meal. 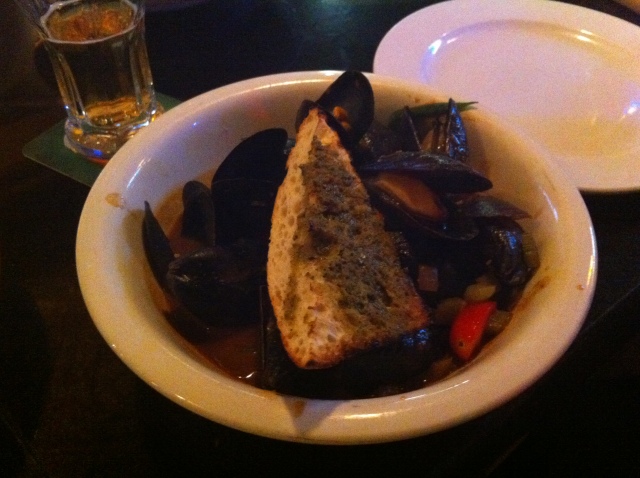 Black PEI mussels in a thick Creole sauce with another piece of corn bread smeared with some stuff. The portion was huge for me (my friend is a vegetarian and doesn’t eat seafood) so I had it all to myself. Thank the Lord because I don’t think I could have shared that, and I’m not even a fan of mussels/oysters/other stuff of that ilk. But definitely the highlight of this dish was the Creole sauce. I don’t know what kind of billionaire-level crack they put in that stuff but it was amazing. I sipped the sauce out of the shell, I drenched the corn bread in the sauce, I slurped it with a spoon. I couldn’t get enough of that sauce. By the end, as the waitress cleared my bowl, there wasn’t a lick left of the sauce in there, because it was in my belly. In my soul. I need to find out how they make that sauce. Is it traditional? Should I marry a Creole man? If he can’t cook, should I marry his sister? I would become a lesbian if it meant I could eat that sauce every week for the rest of my life.

(Read: I really need to go back to Big Daddy’s.)

For dessert, we indulged in the pretty safe bet of crème brûlée, which, admittedly is one of my favourite restaurant desserts to order. If it’s on the menu, it’ll probably be in my belly by the time I leave the restaurant.

And that was that for the prix fixe menu. 24$ for a pretty filling meal split between two people. Not bad!

And then the boyfriend came.

Boyfriend loves escargot. This escargot was great. Cheesy, moist, so flavourful. I also dipped my corn bread in that oily fatty residue. Worth it. I didn’t get to taste much because it was too good for him to share*, but I was still able to steal a few bites and those few I tasted were scrum-diddly-umptious. 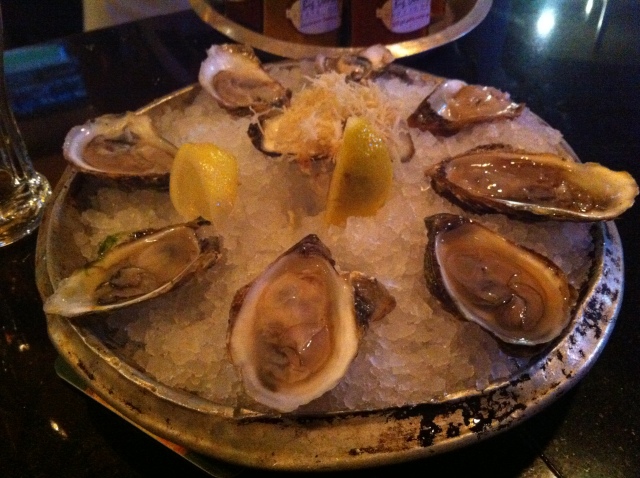 Of course, since this was an oyster bar, we simply had to try their oysters. After my experience at Biff’s, raw oysters are something I crave every once in a while, and the smell of freshly grated horseradish is not something easily resisted. I do believe these were about 5$ for 4 oysters. They also had about 6-8 different sauces that you can try with your oysters. Marinaras, seafood sauces, chilli sauces, really fun to try out. 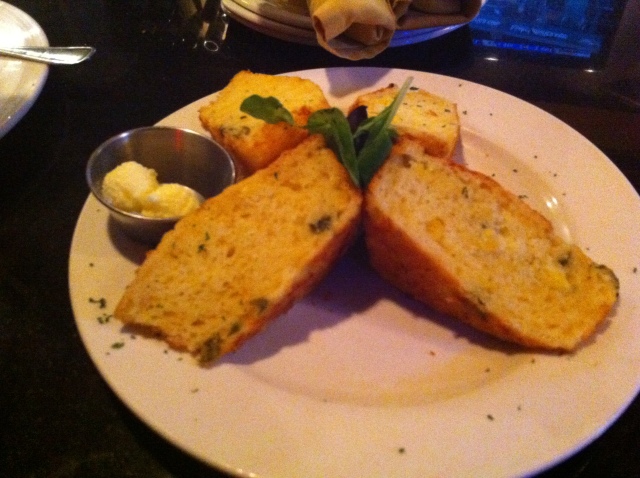 Now it’s time to talk about the bread.

So moist, so sweet, buttery, with a slight hint of herbs and the jalapeno pieces within gave it such a wonderful spice that’s not overpowering. This is truly the food of the Gods. Even with the pieces of corn bread that came with our meals, my stomach and palate forced me to order another side of this wondrous bread. Yes, I am a slave to my body and I am not ashamed.

Let’s stare at the picture for a while and pretend our houses are made out of these golden molds.

In the end, our bill came up to 150$ between three people, but that’s mostly because we had about five or six pints between us as well as five shots of amaretto and some other stuff.. Don’t get a  jagerbomb here, I think it cost thirteen dollars, or something equally as ridiculous. Actually, don’t get a jagerbomb anywhere because it’s just redonk expensive. But you know, the boyfriend has expensive taste.

To sum up, food was great for the price, relatively inexpensive, but the drinks were up the butt expensive (or rather, they were because we weren’t expecting that when ordering out 12$-a-piece meal.)

Boyfriend actually does share with me quite well. Don’t worry, my stomach does not get negatively abused.