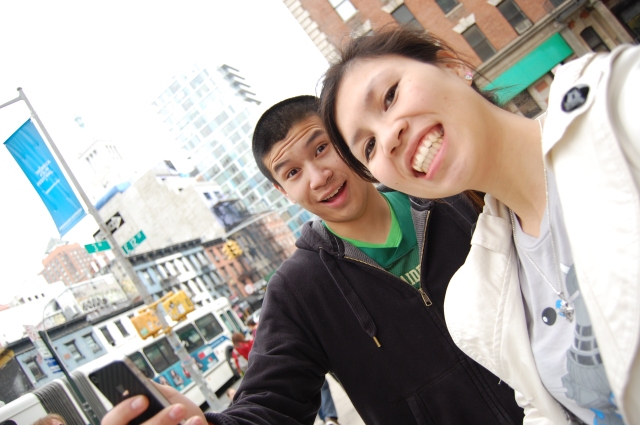 So, this is going to be a pretty image-laden post, but bear with me, I only had a partial real day in New York City. By the time we arrived in the city the morning before, we stood in line all day, and immediately after the event, at around 11/12 at night, we went to check into our hotel, because driving all night and standing in the heat all day, and just the excitement of it all, it gets to be pretty tiring. 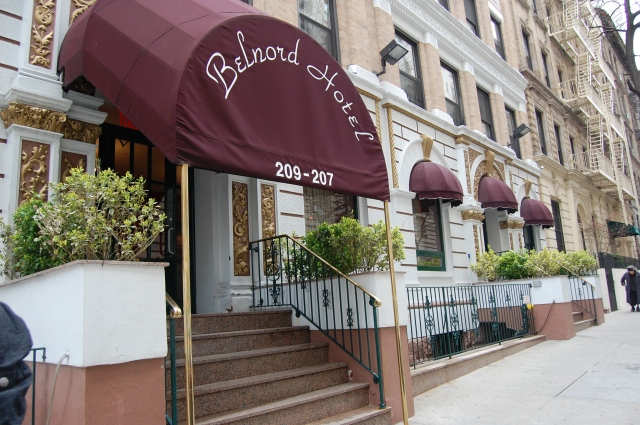 We stayed at the Belnord Hotel at 209 W 87th, which is really just a few blocks from Central Park. It’s a rather nice area, and it was perfect for what we needed it for. It was just me and my brother, and since it’s illegal to park and sleep in your car, we tried to find a hotel that was reasonably priced as well as being on the island so that we wouldn’t have to travel too far for our tourist day. 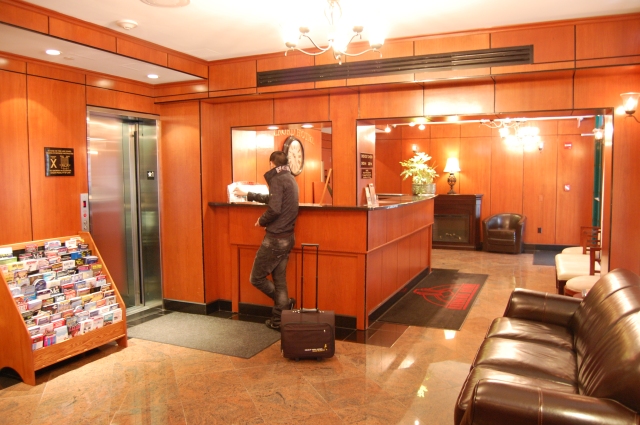 The place was gorgeous inside, very posh and swanky. When you walk into the lobby, it’s hard to imagine that it was only 89$ a night. It came up to 101$ after tax, and split between the two of us, it was really only 50$ each, as I’m sure you can do that math. Although, the more expensive part was parking. We parked at an underground place on the next street for about 16 hours and it ran us about 43$ in all, with a few dollars here and there for tips. Now, there’s a reason that this place is so cheap, for its location and whatnot.

This place was tiny and borderline claustrophobic. The pictures don’t really do it much justice. The hallway was wide enough to probably fit two of me in shoulder-to-shoulder, and the two of me’s would be touching the walls at both sides. An obese person would not be able to walk through here without grazing both sides of the wall. The bed was literally a foot away from each wall.

That being said, it was still very very nice inside. For the price, I was expecting motel-standards, but I felt so posh in here. It was exactly what we were looking for, I mean, we were just passing out there for 10 hours, and then off to see the city anyway. We weren’t going to spend copious amounts of time lounging in there. That, and free wi-fi, which is nice. I racked up quite a hefty phone bill due to my addiction to technology, social networking, and staying connected. Always had to tweet, me, and I paid for it. But I digress, it was nice to bunker down for a night and not have to pay with my first born. I was expecting having to pull our 2-300$ to stay a night. Thank goodness for the internet.

We checked out of the hotel at around 10AM to go about doing tourist-y things. For breakfast, we stopped off at Hot and Crusty, a bagel-y cafe-y place on Broadway and W 88th, and we had this chicken fajita panini. It was deliciously crispy and the fries, oh my, the fries. I’m not a fan of fries, but these ones were so golden and crispy on the outside, yet potato-y on the inside. Hot, warm, delicious. I think this ran us about 4$, which was amazing. I had always assumed New York to be so supremely expensive but this was not the case at all.

So, the only reason my brother came to New York City with me was to go shopping. We cabbed down from our hotel to go to Times Square and do some shopping. I wouldn’t say it was overwhelming, or crazy, or anything, but it was exactly what I expected it would be from what I see in pictures and movies and all that world-wide media stuff. It was loud, garish, and crowded.

We also walked over to do a little shopping on 5th Ave, I know, typical tourist stuff. I had the unfortunate displeasure of allowing myself to be dragged into the Abercrombie & Fitch store, which I can tell you is like that episode of the Magic School Bus, where Mrs. Frizzle shrinks everyone to go into one of the boys’ bodies while he’s sick to help fight the infection. Except instead of going into a sick boy’s body, we walked into the embodiment of the world’s biggest douchebag. Unss-unss-unss-unss. The music was loud and aggravating, and the moderately good-looking people working there, dressed top to bottom in A&F stomped around the floor in an attempt to stay in beat with the music. No, really, there was this tall blonde girl standing in the corner, saying hi to people coming in, and awkwardly moving herself to the beat. Worst job ever. On top of that, I already had a sore coughy throat, and the heavy scent in the air only aggravated it. Honestly, why would your store need that much douche-musk in the air? It doesn’t drive the girlies wild, boys. That, coupled with the fact that there was absolutely no ventilation in the store probably makes for a huge safety and security risk. I mean, imagine if there was just one spark of a flame, it would catch on all the gasses in the air and BOOM. The whole place would go up in flames, not that it’s necessarily a bad thing. There’s still the online store for all your A&F shopping needs.

It was rainy, which brought the whole thing down to a less surrealistic level.

Im soo good-looking that the New Yorkers simply HAD to have my face on a billboard. I brought my brother along in my fame lest he feel excluded. 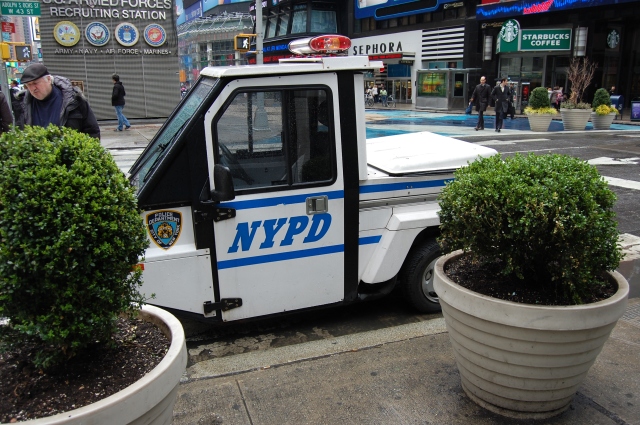 These are simply the best nuts that Ive ever had the pleasure of putting in my mouth.

A deliciously spicy chicken gyro that my brother got. Had a slight hint of curry powder in it. Very yummy. Me, on the other hand, made the disastrous decision of getting a knish, trying to be all adventurous and ordering something that I didnt recognize. Grosss. It was like a giant perogie, that should have been delicious, but it tasted all stale and rotten. Blargh. Maybe someone will someday change my mind on them by making a good one, but that was a misadventure that cost me 3$.

Whats this? An indoor ferris wheel??? 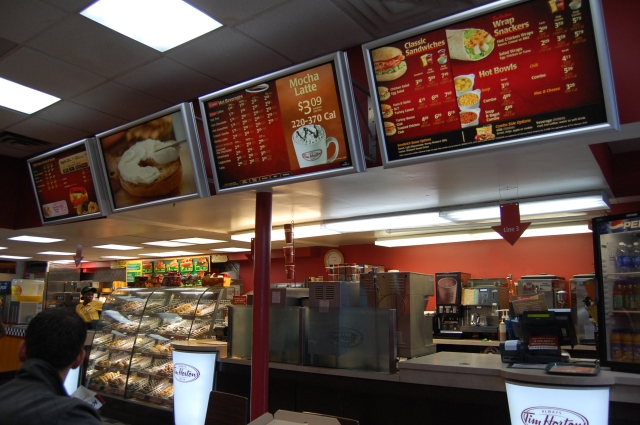 And of course, the Canadian thing to do was to visit Tim Hortons while in the States. No one makes green tea quite like Timmy hos. 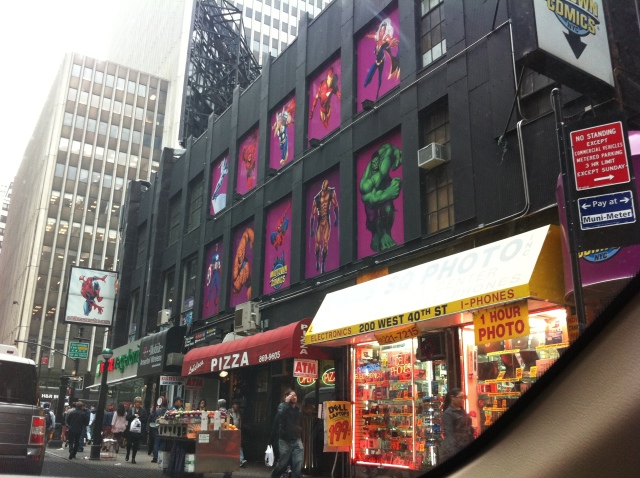 Not in Times Square, but still a cool storefront.

I was surprised by the architecture in New York, especially in the residential districts. So fancy fancy. It had a Victorian-Neogothic feel to it, with the intricate moldings and large windows. So I went creep-mode and took pictures of peoples’ homes. If you saw me through your window, I apologize. 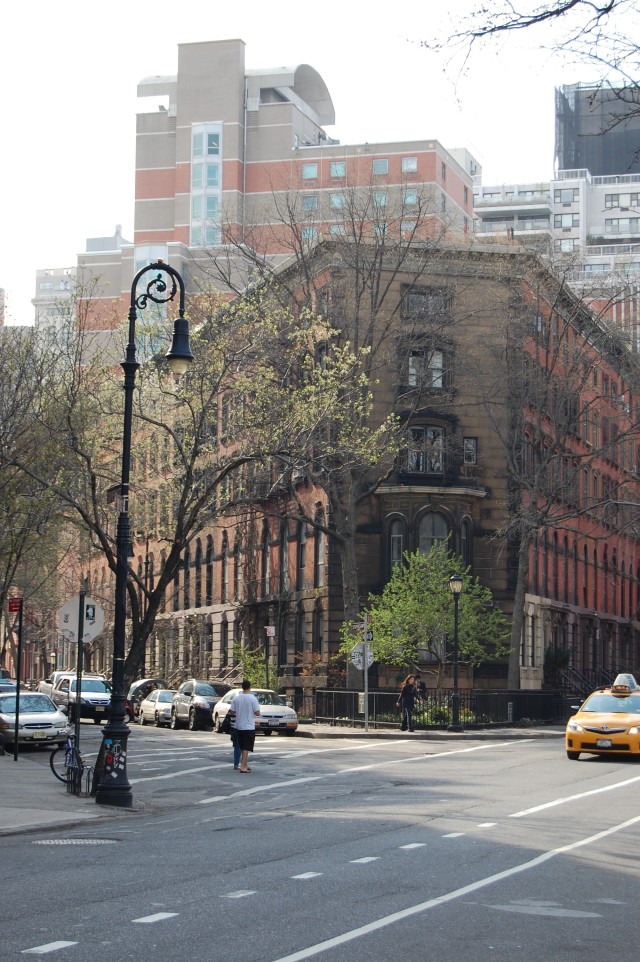 So, after touring around New York City, shopping, till about 3 o’clock, we cabbed our way back to the hotel and drove our asses home. Farewell NYC, I will miss your White Castle, however crappy it was, I’ll still crave it. :(