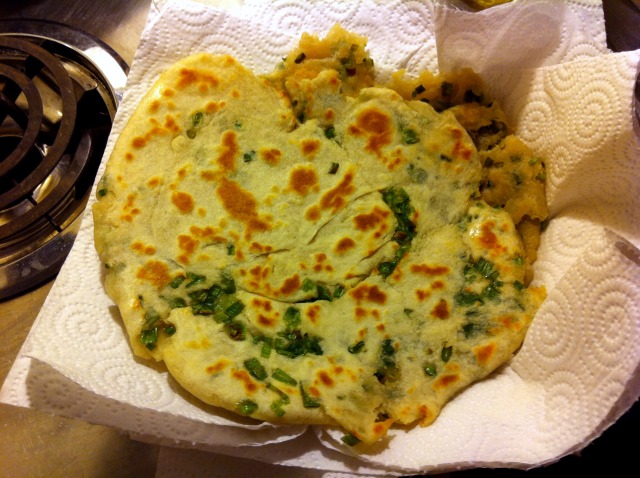 I decided to make scallion pancakes after reading an article about it on Serious Eats, where they really broke down the science of flaky foods, and how they get to be all flaky and whatnot. They also provided a recipe, so I figured, why not have a go. I like pancakes (I lied, I don’t, but I do like fried dough), and I like green onions, so I went ahead and made them. It was actually kind of difficult, and my end result may only get a 65% passing rate.

I don’t have a food processor so I went super asian style and just mixed it by hand. I started off with a 2:1 ratio of flour to hot water and mixed it together until I got most of the flour mixed into the dough. It looked a little like soft mutated popcorn kernels.

I then poured it out onto my lightly floured ghetto working space (parchment paper taped onto the wooden desk) and worked the dough into one integrated piece of dough. I tried to get it as smooth as possible, but I think I put too much flour into it.

Into a bowl, and covered with a damp cloth to rest for 30 minutes, which actually turned into an hour and a half because I left the house.

After dividing the ball into fourths, I got rid of my parchment thing because it got too difficult to roll out the dough. Don’t worry, my table was actually clean, I just didn’t want to make a mess. So, I rolled out the dough, and spread some sesame oil onto it. It was then that I realized how long I’d gone loving sesame oil without realizing what it was. The smell is so aromatic, but after a few hours of the scent I felt a little ill. But I still love it. 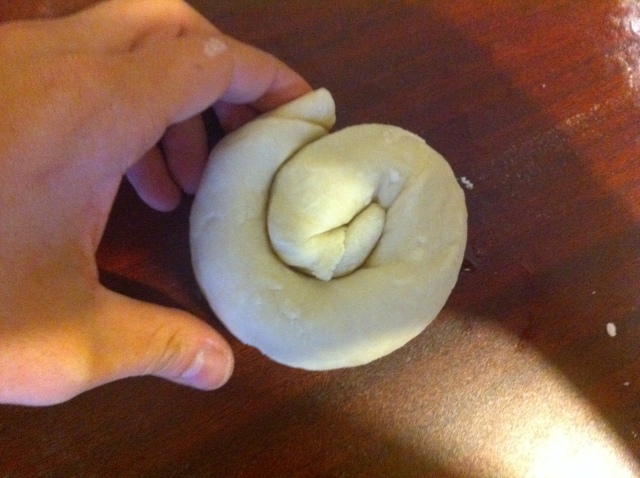 I then flattened it out, added more sesame oil and then chopped green onions on top of it. After which, you roll it up, and twirl it up again.

And then once you flatten it, it kind of looks like this. Yes, I realize its shape is a little bit wonky. 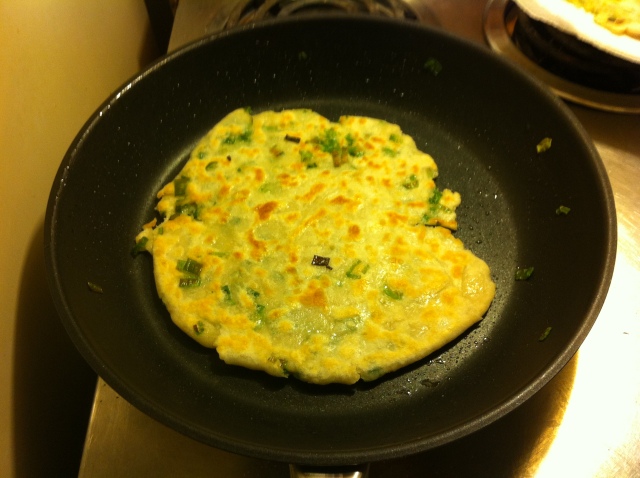 The dipping sauce was a mixture of ginger, green onions, rice wine vinegar, soya sauce, and a bit of sugar.

And then only thing to do after was to sit down, eat, and enjoy my shows.

The scallion pancakes were not as good as I thought they’d be. They weren’t half-bad though. It’s something I’ll probably crave in a few month’s time. A little doughy, maybe not salty enough. But then again, that’s because I didn’t add salt on after like the recipe said. The dipping sauce was really good though.

I think I didn’t fry the pancakes up long enough because they weren’t as dark as the Serious Eats photos. I still have one raw dough one left in the fridge though that I’ll fry up and make it more well done, you know, for science.

Fried up some more, this time, I left it in for longer, and is most definitely more flaky. Very delicious! I am pleased.

It's difficult to see, but if you look really hard, you can see the layers.