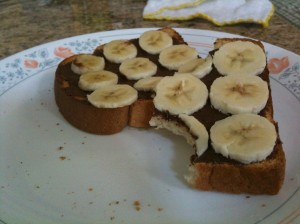 I tried making breakfast today. We had bread, nutella, and bananas. No problem right? Wrong. Don’t let your eyes fool you, that toast you see up there is not at all what you think it is.

I opened up the bag of bread, ready for my 2pm breakfast, when I looked around and found no toaster. Dun dun dunnn. I specifically remember calling my aunt as I was buying the bread, asking if we did indeed have a toaster. Affirmative. So I opened every drawer in the kitchen, there are a lot of them, and can’t find my bread cooker. I hollered out to her, asking where the toaster is. Right beside the water boiler, she says. Right beside the water boiler. On the counter. And on the counter, next to the water boiler, is what? A conventional oven. Or a convection oven. I don’t know what it is called. It’s not a microwave, and it definitely was not a toaster. It’s one of those tiny, miniature ovens.

I was craving my breakfast, so I decided to have a go at it anyway and put my bread in the machine-that-is-not-a-toaster, turn up the heat, and let it go. I watched it for about ten minutes and when I thought it wasn’t doing anything at all, a faint bit of colour creeped along the edges of the white bread meat. Cool, but then it starts spreading faster and faster. I panicked and took the bread out with my hands for fear of burning the bread. Instead, I burned my hands.

It sat on my plate, and it looked okay, so I spread my nutella over, sliced some bananas, and went to town. Upon my first bite, I knew immediately something was wrong. First of all, only one side was crunchy, while the other side was soft as raw bread. I should have seen that coming, so it was kind of my fault anyway. The second bit though, it didn’t even taste like toast. I don’t know what it tasted like, maybe the leftovers of whatever was cooking in their before. But it wasn’t bread. Maybe some particles of the mini-pizzas that me and my brother had cooked the other day was still floating around in that contraption and stuck itself in my bread, maybe it was some other stuff.

I was unsatisfied and therefore will probably go buy a toaster today. That is the story of my failed breakfast.